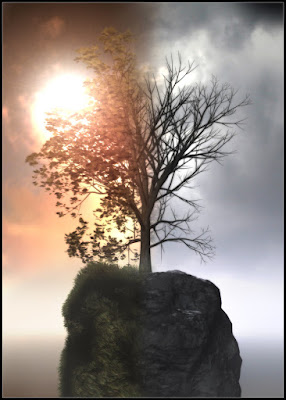 I have met quite a few wonderful spiritual beings. A good number of these were hermits living deep in the Himalaya's or in dense forests. I consider it a blessing to have met them on their rare visits to society or where people reside in numbers. I have great reverence for such human beings, have learned a lot from them through what they taught me and the blissful conversations with them.

That being said we also need to face the truth of duality becoming the modern spirituality with the new age gurus that walk this planet. They preach simplicity and live in sprawling palaces, they talk of no expectation but constantly expect huge crowds at their talks or satsangs, they talk of contentment and build huge centres with all modern facilities, they talk of freedom and go about binding those that follow them with invisible webs, they talk of connecting within then go about building huge icons, idols etc shifting the connection from within to iconization or idol worship. The list can go on and on.

Welcome to the new age of talented orators who know how to add glitter with their words to make common sense which we all know feel like a divine message from an enlightened being. Each such guru has an organisation which in many ways runs like a well managed MNC with numerous departments and loads of staff, well they call them volunteers or sevaks to give it a more spiritual feel of service. I personally have nothing against them or their organisations. I just speak for those that tried or got sucked in to these organisations, got blinded, brainwashed and one fine day woke up to realising they are actually more lost than they were before entering. Have personally met quite a few such humans who have some how come in touch with me to resolve their anguish.

If duality exists then spirituality exits.

Spirituality does not require any set of rules or restrictions. It is to give you freedom and not to bind you within some new boundaries. However once we begin on this journey life and self take on different meanings with every passing day. We start to loose interest in all the artificial requirements, becoming minimalists who can go by with may be just 2 pairs of clothes for life, we loose attachment to things and people, we seek nothing anymore for surrender brings you to a state of acceptance and gratitude and lots more.
It is not easy to put all this in to words, for words can not explain the language of spirituality. There is an analogy that I often use to explain this new spiritual state of being lost to those that come all lost and tired - Imagine there is this huge mountain. Some climb up may be halfway or may be a bit more. Then they find it impossible to go up the remaining climb as it seems treacherous or they just cant see the path. So they sit there, then they see other seekers who wish to reach the summit climbing up. So they sit like they know the path up. These new seekers approach them to guide them further up. Now when they themselves don't know the path up they can not guide others. So they tell the seekers - Well I can show you the path and will guide you further, but you are not ready for the journey ahead. To get ready you need to be able to do 5000 push ups, 5000 sit ups, 5000 pull ups all within 5 minutes. Now when they set such conditions which are not attainable they are ensured of a following and also that no one will ever ask them of the path going up.


True spiritual masters don't seek, want or accept followers. They just assist those that come to them on a path, they monitor them in the beginning, try to infuse some discipline and then just sit back and let the seeker find their own path. Always there to assist or guide if the seeker reaches a dead end or has a fall but never stipulates any conditions once they have started finding their own path. The ways of such spiritual beings are often referred to as erratic, weird and insane. They challenge and break your conditioning and belief system. They will bring about massive changes just by suddenly becoming indifferent or angry. Their indifference or anger is not real but just a way to further propel the seeker deeper in to the path of spirituality. They can only love and love all irrespective of how they respond or reciprocate. They know everything about you just the very second they meet you and yet wait for you to open up, for true healing can only happen when one is ready to work on it themselves. Many get scared of such people, they label them many things for we just love our labels don't we. Quite a few run away from them, a few stick by not because they respect or look up to such humans but because they see and feel the change they have experienced through their guidance.

There is a reason why those that have grown to a certain level spiritually move away from society and go live in the mountains or forests. They can start seeing energies and auras all around them. They can see everything that is going to happen to each human they see passing by on the road. They no longer wish to stay in the matrix as they can actually see the matrix. Their consciousness can now help the planet better when they move away and just send out energy for the whole planet rather than work with individuals. They are not seeking seclusion, they are just very deeply connected with nature and their primal selves.

There were two hermits I had met within a span of 3 years. The first one lives in a cave in the Himalayas the other lives in a dense forest. When I met the first hermit he just came up to me and hugged me and whispered something in my ears with mentioning my name. A man I had never ever seen or met, knew everything about me the name was just the tip of the ice berg. He was over a 100 years of age but did not look like that. He lives high up the snow laden Himalayas with virtually nothing with him. He would never wear clothes unless he was visiting a human settlement. When among humans he just tried to blend in with the others to avoid drawing attention. Both these hermits though living far apart from each other were identical in their way of life as well as what they taught me. They never sought anything from me, instead gave me what I can never imagine. When they parted both said - Walk your path, if you falter, I will be there.

I am by no way a guru or a master, I am no one. I am just walking the path that I have found, traversing it with the guidance the universe bestows upon me and the road that nature reveals to me. For me spirituality is a way of life so deeply connected that I don't know any other way.